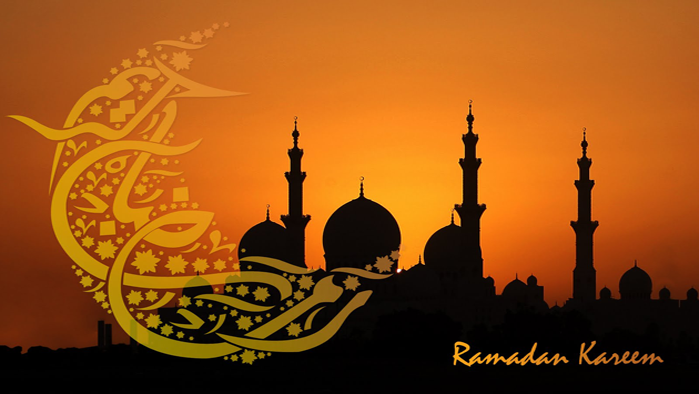 Introduction to Ramadan, the Islamic month of fasting. Its Name and Origin, Prayer & reading of The Qur'an, Events of Ramadan & medical benefits of Fasting.

Ramadan is a Muslim religious observance that takes place during the ninth month of the Islamic calendar, believed to be the month in which the Qur'an began to be revealed.

The name "Ramadan" is taken from the name of this month; the word itself derived from an Arabic word for intense heat, scorched ground, and shortness of rations. It is considered the most venerated and blessed month of the Islamic year. Prayers, sawm (fasting), charity, and self-accountability are especially stressed at this time; religious observances associated with Ramadan are kept throughout the month.

Laylat al-Qadr (Night of Power), which falls during the last third, commemorates the revelation of the first verses of the Qur'an and is considered the most holy night of the year. Ramadan ends with the holiday Eid ul-Fitr, on which feasts are held. During the month following Ramadan, called Shawwal, Muslims are encouraged to fast for a further six days.

The most prominent event of this month is the fasting (sawm) practiced by the most observant Muslims. Every day during the month of Ramadan, Muslims around the world get up before dawn to eat the Suhoor meal (the pre dawn meal) and perform their fajr prayer. They break their fast when the fourth prayer of the day, Maghrib (sunset), is due.

During Ramadan, Muslims are expected to put more effort into following the teachings of Islam and to avoid obscene and irreligious sights and sounds. Sexual activities during fasting hours are also forbidden.[Qur'an 2:187] Purity of both thought and action is important. The fast is intended to be an exacting act of deep personal worship in which Muslims seek a raised level of closeness to God Almighty. The act of fasting is said to redirect the heart away from worldly activities, its purpose being to cleanse the inner soul and free it from harm. Properly observing the fast is supposed to induce a comfortable feeling of peace and calm. It also allows Muslims to practice self-discipline, sacrifice, and sympathy for those who are less fortunate, intended to make Muslims more generous and charitable. Muslims can eat after the sun has set. Pregnant women, the elderly, the ill and children less than 12 years of age are all exempt from fasting as lack of food could damage health.

Prayer and Reading of The Qur'an

In addition to fasting, Muslims are encouraged to read the entire Qur'an.

Sunni Muslims tend to perform the recitation of the entire Qur'an by means of special prayers, called Tarawih, which are held in the mosques every night of the month, during which a whole section of the Qur'an (juz, which is 1/30 of the Qur'an) is recited, so that by the end of the month the entire Qur'an has been completed. Tarawih is an Arabic phrase referring to those extra prayers. This prayer is performed after salah of Isha'a, but before the witr rakat.

Muslims also pay Zakat (only applicable if one can afford it) during the month. For those who qualify to pay Zakaat, as per the Islamic Nisab (that is those whose wealth exceeds their necessities), of the leftover of their wealth earned in that Islamic calendar year. Although Zakat can be paid any time of the year, it has to be calculated on a year to year basis, and many Muslims use Ramadan as the month for calculation and disbursement.

Ramadan is also a time when Muslims are to slow down from worldly affairs and focus on self reformation, spiritual cleansing and enlightenment, establishing a link between God Almighty and themselves by prayer, supplication, charity, good deeds, kindness and helping others.

Since it is a festival of giving and sharing, Muslims prepare special foods and buy gifts for their family and friends and for giving to the poor and needy who cannot afford it, this can involve buying new clothes, shoes and other items of need. There is also a social aspect involved - the preparing of special foods and inviting people for the Iftar meal (the meal to break the Fast).

In many Muslim and non Muslim countries with large Muslim populations, markets close down in the evening to enable people to perform prayers and consume the Iftar meal (the meal to end the fast) - these markets then re-open and stay open for a good part of the night. Muslims can be seen shopping, eating, spending time with their friends and family during the evening hours.

Laylat al-Qadr , literally the "Night of Decrees" or "Night of Measures" or "Night of Power", is the anniversary of two very important dates in Islam that occurred in the month of Ramadan. Muslims believe that it was the night of the Laylat al-Qadr that the Quran's first verse was revealed. The exact night of the Laylat al-Qadr is only known to God and Muhammed but he chose to keep it to himself so that Muslims won't pray only that night. That is why Muhammad indicated that it was one of the last ten odd nights of Ramadan.

The Islamic holiday of Eid ul-Fitr marks the end of the fasting period of Ramadan and the first day of the following month, after another new moon has been sighted. The Eid falls after 29 or 30 days of fasting, as per the lunar sighting. Eid ul-Fitr means the Festival of Breaking the Fast, a special celebration is made. Food is donated to the poor (Zakat al-Fitr), everyone puts on their best, preferably new, clothes, and communal prayers are held in the early morning, followed by feasting and visiting relatives and friends. The prayer is two rakaahs only, and it is an optional prayer as opposed to the compulsory 5 daily prayers. According to one current school of thought (Ankaboot), it is suggested that North American Muslims arrange their work-schedule for Eid by requesting the two most likely days of Eid as Holidays or simply as days off from work. This allows for quality family time, and is akin to the Christian/North American tradition of taking Christmas and Christmas Eve off as holidays. This also allows for time off to celebrate the Eid prayer at a mosque and with family. The fast always ends after 29 or 30 days of fasting, and thus the request would be for the 29th and 30th day after the start of the fast.

Muslims are encouraged to fast six days in Shawwal, the month following Ramadan that begins after Eid ul-Fitr; these days need not be consecutive. According to hadith, one who fasts the month of Ramadan and six days during Shawwal will be rewarded as though he fasted the entire year.

Muslims do not fast because of medical benefits which are of a secondary nature. Fasting has been used by patients for weight management, to rest the digestive tract and for lowering lipids. There are many adverse effects of total fasting as well as of crash diets. Islamic fasting is different from such diet plans because in Ramadan fasting, there is no malnutrition or inadequate calorie intake. The calorie intake of Muslims during Ramadan is at or slightly below the nutritional requirement guidelines. In addition, the fasting in Ramadan is voluntarily taken and is not a prescribed imposition from the physician.

Ramadan is a month of self-regulation and self training, with the hope that this training will last beyond the end of Ramadan. If the lessons learned during Ramadan, whether in terms of dietary intake or righteousness, are carried on after Ramadan, there effects will be long lasting. Moreover, the type of food taken during Ramadan does not have any selective criteria of crash diets such as those which are protein only or fruit only type diets. Everything that is permissible is taken in moderate quantities.

The difference between Ramadan and total fasting is the timing of the food; during Ramadan, we basically miss lunch and take an early breakfast and do not eat until dusk. Abstinence from water for 8 to 10 hours is not necessarily bad for health and in fact, it causes concentration of all fluids within the body, producing slight dehydration. The body has its own water conservation mechanism; in fact, it has been shown that slight dehydration and water conservation, at least in plant life, improve their longevity.

The physiological effect of fasting includes lowering of blood sugar, lowering of cholesterol and lowering of the systolic blood pressure. In fact, Ramadan fasting would be an ideal recommendation for the treatment of mild to moderate, stable, non-insulin diabetes, obesity, and essential hypertension.

In 1994 the first International Congress on "Health and Ramadan", held in Casablanca, entered 50 extensive studies on the medical ethics of fasting. While improvement in many medical conditions was noted; however, in no way did fasting worsen any patients' health or their baseline medical condition. On the other hand, patients who are suffering from severe diseases, whether type I diabetes or coronary artery disease, kidney stones, etc., are exempt from fasting and should not be allowed to fast.

There are psychological effects of fasting as well. There is a peace and tranquility for those who fast during the month of Ramadan. Personal hostility is at a minimum, and the crime rate decreases. Muslims take advice from the Prophet who said, "If one slanders you or aggresses against you, say I am fasting." This psychological improvement could be related to better stabilization of blood glucose during fasting as hypoglycemia after eating, aggravates behavior changes. There is a beneficial effect of extra prayer at night. This not only helps with better utilization of food but also helps in energy output. There are 10 extra calories output for each unit of the prayer. Again, we do not do prayers for exercise, but a mild movement of the joints with extra calorie utilization is a better form of exercise. Similarly, recitation of the Quran not only produces a tranquility of heart and mind, but improves the memory.

One of the odd nights in the last 10 days of Ramadan is called the night of power when angels descend down, and take the prayer of worship to God for acceptance.

Fasting is a special act of worship which is only between humans and God since no one else knows for sure if this person is actually fasting. Thus God says in haddith Qudsi that "Fasting is for Me and I only will reward it". In another haddith, the Prophet Muhammad (peace be upon him) has said "If one does not give up falsehoods in words and actions, God has no need of him giving up food and drink".
Ramadan; Why Fast? - Nouman Ali Khan

"We have indeed revealed this (Message) in the night of Power: And what will explain to thee what the Night of Power is? The Night of Power is better than a thousand Months. Therein come down the angels and the Spirit by Allah's permission, on every errand: Peace!... This until the rise of Morn!"