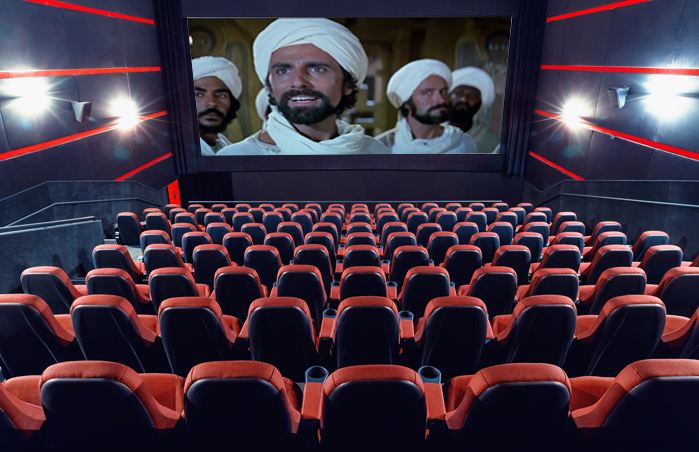 Watch Islamic videos such as The Message, The Last Prophet, How The Bible Led Me To Islam, The Muslim Heart Softness Test, Legacy of A Prophet, Is There A True Religion, Women's Rights in Islam, Quran - The Final Miracle, My Prayer - Step by Step Guide to Salah, Ramadan; Why Fast?, The Purpose of Life, The Historical Jesus, Understanding Islam, Ingredients For A Happy Marriage, How To Respond To Insults Against Islam and The Hereafter Series.

The Message - Story of Islam

This movie is about the story of Islam set in the 7th century in Mecca, where powerful leaders are in conflict with Muhammad (Pbuh) who attacks the many injustices their way of life producers - slavery, drunkeness and cruelty. Muhammad (Pbuh) claims to have seen a vision of Angel Gabriel and calls to the people of Mecca to worship the One True God. After a revelation from God, Muhammad (Pbuh) agrees to take arms against Mecca and at the wells of Badr, the inexperienced Muslim troops are victorius. However, at the battle of Uhud, they are beaten. They accept a ten year truce, so that they can continue to spread the word (Message) of God.

Muhammad the last prophet is an animated production of the early days of Islam. This animation aims to introduce Islam and the last and final Prophet Muhhamad (PBUH) to children and adults alike. There is a choice of screen language of English and Arabic. Subtitles are similarly available in arabic and english. The prophet (pbuh) is not personified in any way or form. Muhammad the last prophet animation is the story of Islam and is a must see for all faiths.

How The Bible Led Me To Islam

How The Bible Led Me To Islam is a lecture by Joshua (Yusha) Evans, who is an American, former Christian Youth Minister & Missionary from South Carolina who reverted to Islam. Upon studying the bible from cover to cover and realizing many things were askew, and a lot of what he believed his entire life was not in line with what his research found, he left Christianity and went in search of the truth. After many twist and turns, ups and downs and after looking at the many world religions searching for the tangible proof of the right way of life he encountered a Muslim, and was given a Qur’an.

Muhammad - Legacy of A Prophet

A lively, thorough, and revealing portrait of Muhammad, the man and the Prophet. It takes viewers not only to the world of 7th century Arabia to examine the life and history of the man whom Muslims consider to be the last prophet, but also looks into the homes, mosques, and workplaces of some of America's seven million Muslims to discover the many ways in which Muslims today continue to follow Muhammad's example. Especially relevant in a post 9-11 world, this film shows a side of Islam and Muslims that is rarely encountered on the television or movie screen.

Is There A True Religion - Dr. Bilal Philips

Dr. Bilal Phillips discusses the true way of submission and path to God and why every religion cannot be true. How there is one perfect way to reach paradise. Sheikh Bilal is himself a convert, who has gone through many stages in life, from near disbelief, Communism, Christianity, to Islam.

Br. Nouman Ali Khan explains Islam in very simple to understand English. Nouman Ali Khan is an American Muslim speaker and founder, CEO and lead instructor at The Bayyinah Institute for Arabic and Qur'anic Studies. Nouman founded Bayyinah in 2006, after serving as a professor of Arabic at Nassau Community College. He also lectures internationally on the matters of Tafsir and learning Arabic to understand the Quran.

In modern days many people have been misguided or brainwashed to believe that Islam subjugate women. The mass anti-Islamic journalism that has been taking place the last few years have played a big role in spreading such misconceptions. Rather than basing your judgements about Islam's view on women's rights, on biased sources, join Yusuf Estes and explore the truth yourself.

The Final Miracle by Nouman Ali Khan at IIUM during the 2013 Malaysian Tour. Held at the Putra World Trade Centre, Kuala Lumpur on the 6th Sep 2013.

My Prayer - Step by Step Guide to Salah

The My Prayer project is an initiative designed to assist Muslims grasp the basic knowledge about prayer and how to perform it. This video is professionally filmed, directed and produced, offering viewers high quality educational content. The my Prayer video is narrated by Sheikh Bilal Dannoun, guiding viewers through the actions of making ablution (wudoo) and performing prayer in a simple and easy to understand style. Other aspects of prayer, such as the pre-requisites of prayer will be discussed, giving viewers a complete overview of what is required to perform their prayers in the best and correct manner.

Ustadh Nouman Ali Khan explains why we even fast in Ramadan. This message is crucial to get us in the correct mindset for the entire month!

The Purpose Of Life - Khalid Yasin

Khalid Yasin delivered this lecture in Saudi Arabia in 1994, which resulted in 43 persons accepting Islam on that very night. What Is The Purpose of Life? Why are we here and where are we going? Through the verses of the Holy Qur'an, Shaykh Khalid Yasin expounds upon the creation of the universe and this amazing world we live in -- and how it came to be. With his logical style of argument, the Shaykh answers these questions with much wisdom.

This lecture is based on Historical facts rather than mythical beliefs or beliefs that have just been passed done from generation to generation. Come on this fantastic journey and discover the historical Jesus rather than a description of Jesus which was invented hundreds of years after his departure. An excellent lecture for both Muslims and Christians.

A beautiful reminder from the words of Allah and His beloved prophet Muhammad (Peace and blessings upon him) on how spouses should treat one another in order to maintain harmony in the home. This advice is beneficial to both, Muslims and non-Muslims and is a highly recommended video to watch.

How To Respond To Insults Against Islam - Nouman Ali Khan

An excellent reminder on how to react to Insults against Islam and our beloved prophet Muhammad peace and blessings upon him.

Do you think about converting to Islam, but have obstacles that hold you back?

John, a Muslim revert from America, was once in the same position and we hope that hearing from a Muslim revert inspires you to push forward in your conversion to Islam.